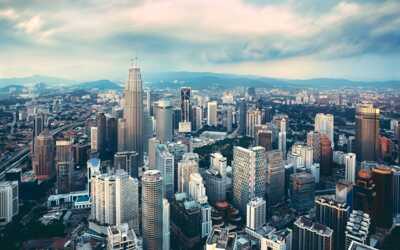 The equator is an imaginary line that runs through the centre of the planet. It runs from west to east, or vice versa, dividing the planet into a Northern Hemisphere and a Southern Hemisphere. The Earth’s diameter is widest at the equator, with a circumference of 40,075 kilometres and a diameter of 12,714 kilometres. As a result, it forms a phenomenon known as an equatorial bulge. This phenomenon implies that people at sea level near the poles are closer to the centre of the Earth than those standing at sea level near the equator.

How the Equator Determines the Climate

A place’s climate is determined by its distance from the equator. Energy from the sun reaches the surfaces at the poles at low angles because it has to pass through a thick layer of the atmosphere. This process leaves the poles colder than places along the equator. Sun energy reaches the equator at a high angle because a thinner layer of atmosphere impedes or diffracts the energy.

In recent years, Malaysia has been one of the countries adopting solar energy as an alternative renewable energy source. Why is that?

Malaysia, a Southeast Asian country, is located along the equator, making it fertile ground for solar power generation. The country is blessed with a natural tropical climate with an average radiation climate of 4,500 kWh m-2 and abundant sunshine 12 hours per day.1

Malaysia has not fully utilised renewable energy sources because the government is still developing and implementing policies and funds. Solar generators are mainly installed at the point of use. One of the common uses of solar energy in Malaysia is to power solar hot water heater systems. However, studies have shown that the use of renewable energy will expand in the future.

Sunlight in Different Parts of Malaysia

Located in Southeast Asia, Malaysia enjoys hot weather and good sunlight in every part of the country. That being said, certain parts of Malaysia do receive more sunlight than others and are perfect for solar panel installation and solar energy generation. These places include Pontian, Kerteh, and Teluk Intan. Based on a study in 2016, Pontian receives the most annual sunlight, generating 5.445kWh m-2 day-1. The solar energy generation plans in these regions are at an advanced stage.

Why Solar Panels Are Important in Malaysia

Homes and commercial buildings in Malaysia use solar panels to generate power for various reasons. By having a solar hot water system, you lessen the heating load via electricity. Hence, it helps to save costs on energy bills—solar energy reduces energy bills by 20–30%.

Because the energy absorbed by the solar panels is renewable, no harm is caused to the environment. On the other hand, generating energy using fossil fuels destabilizes the environment through the release of carbons. As a result, this process harms the atmospheric ozone layer.

As Malaysia is located along the equator, Malaysian people, factories, and industries can greatly benefit from turning to solar energy as their primary source of power. Using renewable energy such as solar increases business efficiency and allows businesses to become more competitive. For households, using solar energy cuts down on energy consumption and electricity bills. All in all, the use of solar energy provides cleaner power, reduces pollution, and saves the environment. For more information on how you can leverage solar radiation to heat your household water with solar water heater, feel free to get in touch with us.